Heat guns make your life easier when performing various tasks, from bending plastics to removing components from a circuit board. Heat guns are also commonly used for removing paint from equipment and machines.

While these tools are versatile and used for a wide range of applications, some options may not offer the features you need. If you plan to remove paint, you need a gun that can reach at least 1000-degrees Fahrenheit.

Before you start your next project, check out the best heat guns for removing paint. 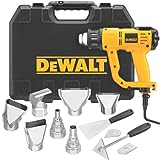 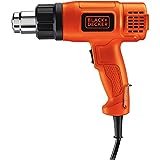 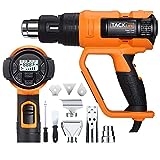 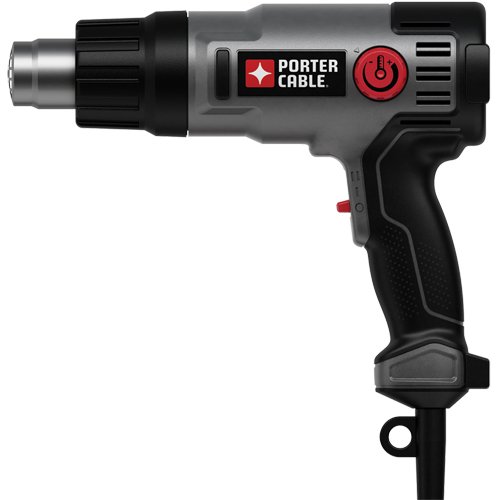 If you have never used a heat gun before, you should not have a problem using this option from PORTER-CABLE. It includes a basic variable temperature control dial and dual fan speed selector.

For a heat gun in this price range, the PORTER-CABLE Heat Gun comes with quite a few features. It includes a variable dial control for multiple heat settings and a two-speed fan. It’s also equipped with a six-foot heavy-duty power cord.

This heat gun works well and can remove paint from most materials. However, it has limited airflow, so it may take a little longer to get the job done.

This affordable heat gun from PORTER-CABLE features a variable temperature control dial and a powerful motor, but doesn’t come with a variety of nozzles.
Check Latest Price Now
Pros
Cons 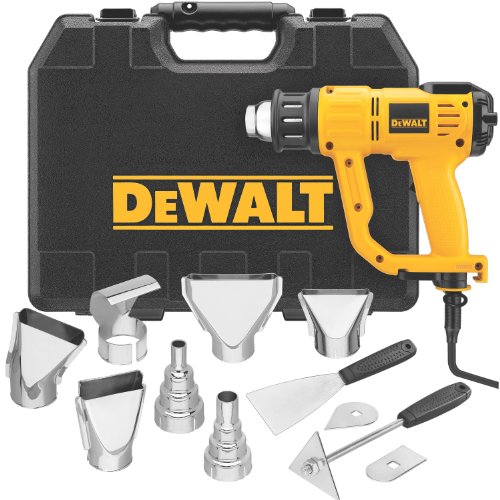 With the DEWALT Heat Gun, you get a large collection of useful accessories packed inside a hard storage case. You get a great value due to the assortment of extra items, such as various attachments.

The DEWALT Heat Gun includes a large LCD display and digital controls. It also has a built-in hang ring and long power cord. However, the best feature is the variety of accessories.

You get seven nozzle attachments, a couple of scrapers, and a large storage case to hold it all.

The DEWALT Heat Gun is comfortable to use and works well for removing paint and performing other tasks.

The cord protector helps keep the cord from getting in the way while the digital controls offer more precision. You can adjust the temperature to within a 50-degree range.

If you decide that you want to use your heat gun for other tasks, the DEWALT Heat Gun likely includes the nozzles you need. Thanks to the variety of accessories and dependable design, this option offers a combination of value and performance.
Check Latest Price Now
Pros
Cons 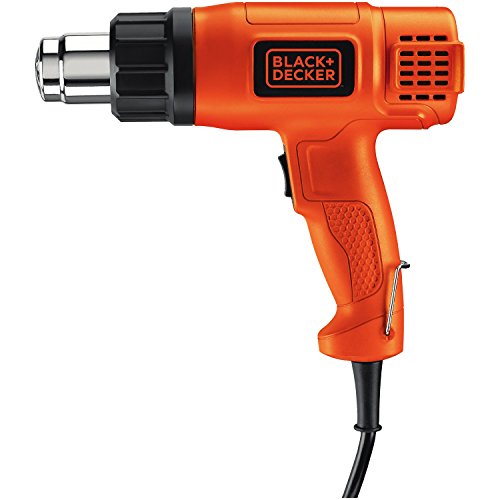 This budget heat gun from BLACK+DECKER is not the most powerful option and lacks some of the features found on other models. However, it is affordable and capable of removing paint.

The BLACK+DECKER Heat Gun has a no-frills design. Instead of a dial control, you just get a switch. You can switch between 750-degrees and 1000-degrees Fahrenheit. It also features a kickstand, allowing you to set it down to cool.

It may take longer to strip paint using this heat gun, due to the limited airflow. However, it will eventually peel the paint from almost any material. 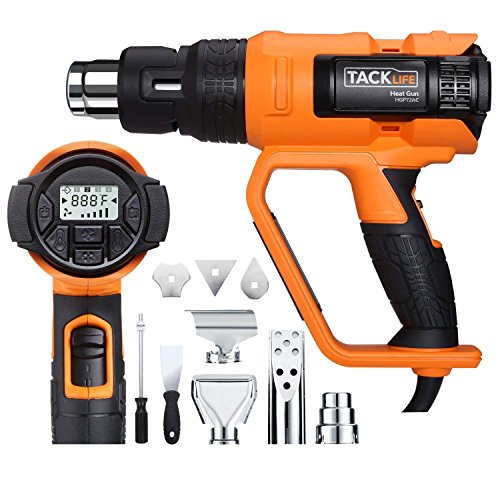 The TACKLIFE Professional Heat Gun comes equipped with several accessories, but the features found on the gun itself make this a top recommendation.

The TACKLIFE comes with several extra nozzles, an LCD display, and digital controls. It’s built for heavy-duty applications, with a working time of 650 hours.

The TACKLIFE Heat Gun is packed with features to increase its performance and versatility. It has a large LCD display and allows precise temperature adjustment to within 20-degree increments.

You can set custom temperature memory settings, for quickly changing the heat for different tasks. The digital controls also allow you to adjust the airflow.

Packed with useful features, such as a large LCD display and four custom memory settings, the TACKLIFE Heat Gun is versatile and dependable. It also cools down quickly, making it suited for heavy-duty use.
Check Latest Price Now
Pros
Cons

What should you look for in a heat gun? If you plan to remove paint, you may not need a heavy-duty gun with several thousand watts of power. However, you should examine the following features:

Along with these features, most heat guns come with safety features such as overload protection and thermal cut-out. The thermal cut-out automatically shuts the heat gun down if the internal temperature exceeds a preset threshold, keeping the tool from overheating and malfunctioning.

The temperature range is the most important feature to compare. Removing paint requires a heat gun that can reach 1000-degrees Fahrenheit.

If you also want to use your heat gun for other tasks, it helps to choose a product with a wide temperature range. Some of the less expensive options may only offer a range of 750 to 1000 degrees, while the more expensive heat guns can go as low as 120-degrees Fahrenheit.

Only a couple of the less expensive heat guns come without some type of temperature control. The standard option is a switch or a dial. With a switch, you simply flip between two preset temperatures.

The switch controls are often fixed at 1000-degrees Fahrenheit or the maximum temperature setting, providing optimal heat for stripping paint. You also typically get a lower setting for applications that require less intense heat.

Dial controls provide greater versatility, allowing you to dial-in the temperature to the necessary range. If you require a precise temperature, look for a heat gun with digital control, which also typically includes an LCD display.

As mentioned, the heat guns with digital controls often have an LCD display. This allows for more precise temperature settings, often to within 50-degrees of the desired temperature.

The LCD display will also show any other settings, such as the airflow or operating mode, depending on the model.

If you need to direct the airflow, you need to attach nozzles to the muzzle of the heat gun. Several of the top choices come equipped with a variety of nozzles to suit different applications.

For example, a wide nozzle is useful when stripping large sections of paint. If you need more precision, you can attach a nozzle with a narrow tip.

With the right heat gun, you can make a quick job out of removing paint. Make sure you find a gun that can reach temperatures of at least 1000-degrees Fahrenheit.

If you have a limited budget, the BLACK+DECKER and PORTER-CABLE are two of the more affordable choices, but they lack accessories. If you want a wide selection of nozzles, the DEWALT and TACKLIFE heat guns should meet your needs.

All four heat guns are reliable choices for removing paint, along with performing a variety of other applications. In the end, choose the one that has the features you prefer, such as an LCD display or a temperature dial.

Mark Young/ author of the article

Hi, I am the main redactor of ToolsDuty. I hope my guides will help you to choose the best tools for your purposes.

Power Tools Buying Guides 0
Maybe you’re a professional construction worker with a lot of wood to cut through.

Power Tools Buying Guides 1
If you’re looking for a powerful compressor to meet your expectations, then you definitely

Power Tools Buying Guides 0
If you’re a construction or a DIY enthusiast, you’ll find yourself in a lot